skip to main | skip to sidebar

Good news, indeed! My book "Free Interpretation Redux" has been published by lulu.com and it will be available through Barnes & Noble, amazon.com and other online booksellers and distributors. The other good news is that the book is now being translated into Spanish and Portuguese. Hopefully, both versions could be published by summer solstice. 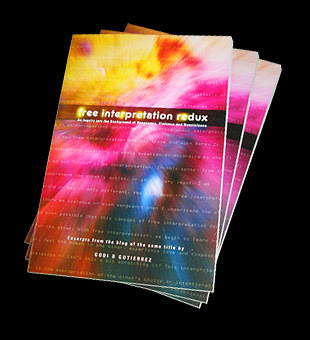 Posted by Godi Gutierrez at 8:22 AM

The Other Good News

You can now buy the book, Free Interpretation Redux online at lulu.com. Or you can download the complete book here for USD5.00. Just click on the Buy button on the right >>.

From the Book's Prologue

"In his book, Godi investigates the function fulfilled in the psychism by revenge, and gradually reveals it to us as a mode of re-establishing an equilibrium, of compensating a core of conflict in which vengeance is an instinctive reaction, in order to reestablish psychic equilibrium. He delves into our roots, enters into the psychology of Paleolithic man, attempts to show the usefulness of that mechanism when the human being struggled to dominate nature, and how that same mechanism, transferred into historical epochs, is leading us toward self-destruction. He carries out an inquiry, investigating and comparing different cultures, he discovers how, in Eastern cultures, great men arose who were capable of leaping over their violence and proposing nonviolence."

--Dario Ergas, author of "The Meaning of Nonmeaning" and "The Look of Meaning"


I had a nice online chat with one of the bloggers following my blog, "Free Interpretation -- An Inquiry into the Background of Vengeance, Violence and Nonviolence".

Finally, I said, nonviolence is about liberating yourself when you
treat others as you would have them treat you.

But what is violence, really? And what about the "survival of the fittest" – as some people would want us to believe. He continued to query.

So, I responded that it is not like that at all. Sure, sometimes, it is like a "jungle" out there, but people are not the same as the animals in the jungle. No, because people have freedom of choice – people have intentions. And this is the main difference between humans and the rest of the other living beings on this planet. Humans have intentionality; they have the freedom to choose. Each individual, each human group has intentionality. And very often, this is exactly where conflicts arise – when people choose to impose their intentionality on others.

When I impose something on another; I am actually choosing for the other. I am therefore negating his fundamental freedom – his freedom to choose. It could be as simple and as innocent as a censure – like stopping someone from saying their mind or voicing their opinion; or as extreme as choosing someone's death for him, as in murder – the extreme case of stopping the other's intentionality – which is to preserve oneself and to continue living.

I can say then, that as long as one does not impose one's beliefs, one's faith, one's god, one's choice, one's intentionality, especially, one's stupidity on another -- then, one can freely do whatever one wants.

What about nonviolence – what is it exactly?

Helping him in his transformation, then, is the greatest active-nonviolence act one can do for another – the most valid of all actions!

It is life's project par excellence!

• In other words, to humanize is to act with nonviolence.

• The most important nonviolent act: to humanize the other.

• If you take this as your reality, as your mission, then nothing can detain you from your destiny, and you would have opened the other's future, his own destiny.